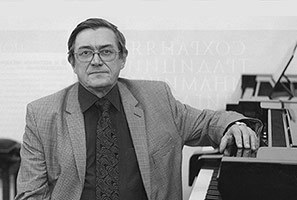 Oleg Malov was born on June 23rd 1947 in Gorkii (Nizhni Novgorod).
In 1965 he entered the Leningrad Conservatoire where he was taught by professors S. Savshinsky and N. Perelman. From 1972, O.Malov has been teaching in the piano department of the St.Petersburg State Conservatoire.
He is now a professor. His graduates work in the best music schools and institutes in Russia, Europe and the USA. Some of them have won the highest prizes in European music competitions.
He has been performing since 1968. His repertoire includes pieces by more than 100 composers. From 1989 on, Oleg Malov took part in the most important festivals of contemporary music in Europe (Germany, Netherlands, Italy, Denmark, Hungary, Austria, Belgium, Luxemburg, Switzerland, USA, Ireland, Spain). He performs as a soloist, ensemble player, conductor.
He has made about 20 recordings and CD with companies such as ""Melodia"", ""Pentagon"", ""Megadisc"", EMC. He has held numerous masterclasses in the top music institutions in Russia, Belgium, Netherlands, Luxemburg, Korea, Germany, USA, Chile.