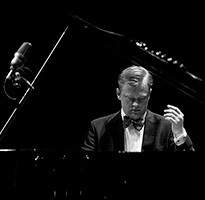 Wilfried Lingenberg was born in Southwest Germany in 1969 and studied Classics and Mathematics in Bonn (Germany) and Oxford (UK). After several years as a management consultant, he is now teaching Latin, Mathematics, and Greek at a Gymnasium (upper secondary school) in Pirmasens, and Latin Literature at Saarbrücken University. Earlier in his musical career, he used to play a number of instruments as well as sing and conduct; later on, he concentrated on piano, organ, and composing, although he has not received formal lessons any more from the age of 21. Public appearances as an amateur pianist included locations such as Moscow, Amsterdam, or Gainesville (Florida, US). Apart from solo recitals and performances with orchestra, he has enjoyed playing two-piano music with Matthias Fischer since 1996. Wilfried Lingenberg was a finalist and prizewinner of the Colorado Springs competition in 2009.