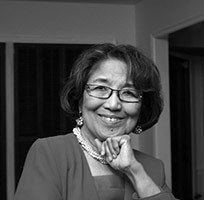 Philippine-born Victoria Bragin was a chemistry professor at Pasadena City College in California and program director in the DIvision of Undergraduate Education at the National Science Foundation in the U.S., managing projects involving digital libraries and curriculum development. She is the only woman to win first-prize in the Cliburn International Piano Competition for Outstanding Amateurs in 15 years. After retiring in 2002, she became Music Artist-in- Residence at the Huntington Museum of Art in West Virginia, performing and producing concerts in conjunction with Museum exhibits. She received the Herald-Dispatch Citizen Award for the Arts for her arts work and advocacy. She was featured on National Public Radio’s Performance Today, Chicago’s classical music station WFMT’s Pianoforte Salon, and WVWV’s In Touch with the Arts. She has performed in Nice, Stuttgart, Verbier, Warsaw, and Berlin.
She and her husband of fifty years have two children and two granddaughters.