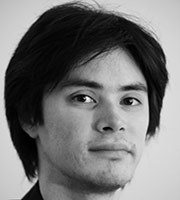 Simon Grisdale's introduction to playing music started at age four, with the violin. Piano lessons followed shortly after, at age six. For both primary school and secondary schools he obtained music scholarships and had a deep involvement in many musical activities. For university Simon opted for a different route, majoring in Japanese studies. In the third year of the course he had a serious accident which left him in a wheelchair and put a temporary halt to his studies. Although the piano had taken a back seat since school, after graduating from university he felt the urge to take it up seriously again. In March 2011, he decided to enter the Concours International des Grands Amateurs de Piano, winning 1st prize. In October, 2011, he played Mozart's Piano Concerto no.23 with the Orchestre de la Garde Républicaine at the Opera Comique in Paris. Simon derives great satisfaction from a variety of musical cultures. Music, as a mode of both expression and relaxation, has always played an integral part in his life. Thankfully, not being able to play the pedal is not too much of an incumbency, due to the richness of the classical, baroque and modern repertoire which he is keen to keep exploring in the future. Simon is also an experienced Japanese language
translator and is based in London.