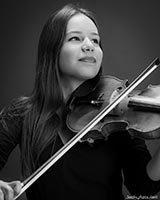 Raphaëlle Moreau, from a family of musicians started the violin aged four in the Suzuki system. Showing great promise from a very early age, Raphaëlle Moreau played “Oblivion” by Karol Beffa with the London Symphony Orchestra in Salle Pleyel. In 2009 she went on to take lessons with Professor Pavel Vernikov at the Scoula di Musica di Fiesole. In this year she was awarded first prize and the overall grand prize at the International Andrea Postacchini Violin Competition.

At the tender age of 14 she commenced her bachelor degree at the prestigious Conservatoire National Supérieur de Paris under the tutelage of Prof.Roland Daugareil. During this time she performed in major concerts across Europe including the “San Vito Musico Estate” 3rd festival where she performed Mozart Violin concerto no.1, International Oleg Kagan festival as a soloist with the Georgian Chamber Orchestra and a recital at Banque de France, Paris. Raphaëlle also participated in masterclasses and academies with renowned artists like Salvatore Accardo and Renaud Capuçon.

When receiving her Bachelor degree in 2013 she went on to continue her studies at the Haute Ecole de Musique de Lausanne with Prof. Pavel Vernikov as a Masters student. Playing in Switzerland as a soloist accompanied by orchstra she took part in the Sion Festival and played with the L’Orchestre de Saint-Maurice. Chosen to participate in the “Jeunes Interprètes” program, she performed live on Radio France a full recital. She continued to play in major festivals (as a chamber musician and solo player) like Festival Perigord Noir, Montpellier Radio France, Rencontres Musicales d’Evian and the Festival de Pâques d’Aix en Provence. As well as this she was chosen to participate in the highly prestigious Seiji Ozawa In ternational Academy for two consecutive years.

She is currently in the middle of her Second Masters Degree, specializing in solo playing under the tutelage of Renaud Capuçon.