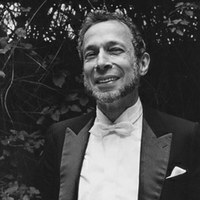 Noël Lee, American composer and pianist, received an early musical education in Lafayette, Indiana, from the age of 5. After studying at Harvard University with Walter Piston, Irving Fine and Tillman Merritt—interrupted by 38 months of military service during World War II—and at the New England Conservatory of Music, he went to Paris in 1948 to continue his education under the guidance of Nadia Boulanger. She has written: Noël Lee is one of the finest musicians I have met. Composer with a real personality, he has refinement, a sense of the hierarchy of values and a total understanding of the works.

Among the many award he received in early years—including the Lili Boulanger Composition Prize and a prize in the Young Composers’ Contest of the Louisville Orchestra—the one from the American Academy of Arts and Letters (1959), in recognition of his creative work in general, is of particular interest. During the 1970’s, the French Cultural Affairs Ministry and the French National Radio gave him three important commissions. In 1986 a second prize in the Arthur Honegger Composition Contest for a set of Piano Etudes—the first prize going to György Ligeti—and in 1991, the Charles Oulmont Prize were awarded him by the Fondation de France. Aaron Copland has written: Here is a composer who writes his music with his eyes wide open, and with a kind of cool intensity the defines his personality…Music to him is a natural language, a language he uses without strain or mannerism…no matter how complex the textures may be, the musical discourse is always lucid and reasoned.

Lee’s career as concert pianist has led him on tour on six continents. In Europe he has recorded 200 LPs and CDs since 1955, of which 14 have received a Grand Prix du Disque. This recorded repertory—from J.S. Bach to Jean Barraqué—comprises the first complete recording of all the Schubert Piano Sonatas, including several unfinished ones which Lee has completed, the entire piano literature of Debussy and Ravel, and numerous works of 20th century giants—Charles Ives, Charles Griffes, Béla Bartok, Igor Stravinksy, Aaron Copland, Elliott Carter. Over 20 disc are devoted to four-hand and two-piano works—Mozart, Schubert, Stravinsky, Debussy, and French and American composers—in collaboration with Christian Ivaldi, and several of piano-violin duos with Gérald Poulet. In addition, his repertoire includes 30 Concerti and embraces a sizable portion of 19th and 20th-century chamber and vocal music, particularly that of France.

In the United States Lee has been a visiting professor at Brandeis and Cornell Universities and at Dartmouth College. In Europe he is frequently called upon to give workshops in piano, in chamber music, in vocal literature, and collaborates with publishing houses for new editions of French piano, four-hand and two-hand piano music. His edition of eight early four-hand works of Claude Debussy, of which five were published for the first time, was released in 2002 by the Durand Editions in Paris.

In the Spring of 1998 the department of Cultural Affairs in the French government award Lee the grade of Commandeur de l’Ordre des Arts et Lettres. In 1999 he received from the city of Paris the Grand Prix de la Musique and in 2004 la Grande Médaille.