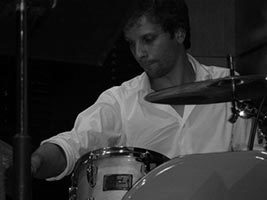 Julien Machet is a French percussionist and composer. After having attended the music classes of the Conservatory of Châlons-en-Champagne and the Dante Agostini Drum Set School of Paris, he received in 2006 a scholarship to study at the prestigious Berklee College of Music of Boston, where he graduated in 2009. Interested in all kind of music genres, his time in the USA allowed him to definitely launch his career as a very eclectic musician. Percussionnist for the Brazilian band AfroBrazil, studio percussionist and drummer in New York, Boston and Los Angeles for the jazz label ObliqSound and the pop label Rawsession, drummer for Lulu Gainsbourg's group for the American concerts, and even gypsy-jazz guitarist, Julien toured extensively in the North East of America, hitting numerous stages of the American jazz scene and festivals. In 2013, he is selected to be part of the artist database of Cirque du Soleil. He also performs as a percussionist at the Opera of Reims, while working as a composer and arranger in Paris.