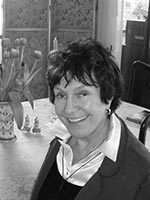 Joan was born into a musical family in Toronto, Canada. Her businessman father began his career as a jazz musician and in later life regularly combined business trips with sitting in and playing with bands in New Orleans and other cities. Joan graduated from the University of Toronto with a degree in Music Performance and after study abroad, returned to Toronto to perform and teach at the Royal Conservatory of Music. She also taught in the Music department of Northwestern University in Illinois for 3 years, but shortly thereafter she left music and embarked on a 35 year career in property design in Toronto. Six years ago, a change in her personal circumstances allowed her to return to her first love. She is thoroughly enjoying practising, the friendship of other piano nerds, participating in international piano competitions and playing several concerts a year for various charitable events. She recently gave a concert in honour of her mother's 97th birthday - an annual tradition which began on her 92nd. Joan also has 6 talented violinist grandchildren who she coaches several times a week . She is delighted to be in playing Nice this summer.