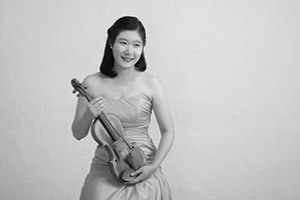 Hyunah Chang was born in Seoul, Korea. She started the violin at 6, and has enjoyed a variety of arts experiences, thanks to her parents' warm support. She studied violin performance at Daejeon Arts High School, receiving a full scholarship for 3 years, due to the grand prize she won at Daejeon Arts High School Competition. She earned her B.M. from Seoul National University, and her M.M. from New England Conservatory. She has performed as a soloist with many orchestras, including Daejeon Philharmonic Orchestra (1994), Kangnam Youth Orchestra (2004), and Russia Khabarovsk Symphony Orchestra (2001). Also, she has received numerous awards in many competitions, including University of Seoul Competition (2000) and Atlantic Symphony Orchestra Concerto Competition (2011).
Ms. Chang has regularly given recitals and performed actively in orchestral and chamber music settings. She is a member of Trio Eclat and Sion Trio. As a founding member of Sion Trio, she has performed in the Rising Star Concert Series sponsored by Munhwa Broadcasting Corporation. As an orchestral musician, she has performed in Boston Civic Orchestra as the principal first violinist. Currently, Ms. Chang lives in Boston and performs throughout the New England area. She is pursuing her DMA at Boston University, studying with Prof. Peter Zazofsky.