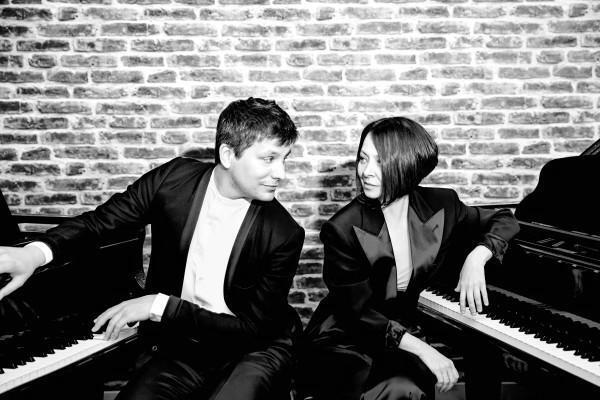 « An incredible duo... what if the Berlinskaya-Ancelle piano duo was simply the most thrilling one of the current scene? »
Alban Deags - classiquenews.com

Drawing their strength from their taste for sharing, taking risks, and exploring, Ludmila Berlinskaya and Arthur Ancelle are inseparable pianists; they are a symbiotic couple on and off stage.

« Sensational pianists » (Fanfare), « brilliant, cheerful » (Diapason), « cultivating duality in a supernatural dimension » (Le Monde), their « superb technique » (Classica), their synchronization giving « the impression of only one player » (musicweb-international), and their « really dazzling play» (fonoforum) place them on the top list of the international stage’s piano duos.

Both coming from a long line of famous performers, and both accomplished soloists, Ludmila Berlinskaya and Arthur Ancelle have developed a Franco-Russian piano duo symbolized by an unfaltering mutual understanding. They aspire, thanks to their complicity and cultural heritage, but also thanks to their energy on stage, their original repertoire, their unprecedented concert format, and their communication with the audience, to give to piano duos a status equal to other forms of chamber music.

In a short time, the duo has crafted a repertoire full of the « hits » for two pianos and four hands, as well as of rare works, exploring original compositions as much as new transcriptions, which have been enriched by Arthur Ancelle's scores, such as: Francesca da Rimini, Romeo & Juliet, After a reading of Dante, etc. Arthur Ancelle has transcribed about a dozen scores of stature for the duo; the first two were published by Jurgenson and Chant du Monde.

They are invited by prestigious festivals, such as the Musical Summits in Gstaad, the Moscow December Nights Festival, the Tokyo Spring Festival, the Rota das Artes in Lisboa, the Lisztomanias, the Solistes à Bagatelle, or the Pianofolies du Touquet in France. In Russia, they perform every year in the finest concert halls of Moscow and Saint-Petersburg, and they will make their début in the Auditorium de Radio France this season.

Bolstered by intense recording activity as a duo, as soloists, or as chamber musicians, Ludmila Berlinskaya and Arthur Ancelle released 6 albums together, all have been extremely well received by the international press. Melodiya artists since 2014, Ludmila Berlinskaya and Arthur Ancelle have received multiple prizes and awards, such as the Editor’s Choice of Gramophone, the Choc of Classica, Album of the year by Le Monde, Album of the year by Libération, Pianiste Maestro, etc.

Started in 2018, their « 2-pianos originals project » intends to popularize this repertoire among music lovers.

Their creativity and desire to contribute are also visible thanks to the artistic direction of two festivals : La Clé des Portes festival takes place within the magical surroundings of the Loire Castles since 2012, and the Rungis Piano-Piano Festival, entirely dedicated to the universe of 2-pianos and 4-hands.