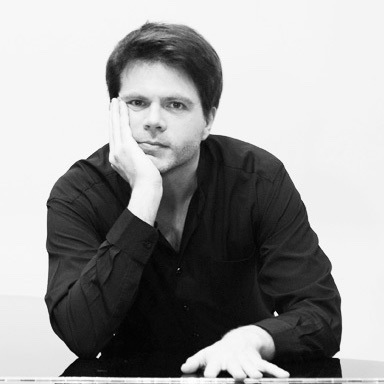 The relationship between the piano and Axel Lenarduzzi started as a pinnacle that brought on many more: the end of his education, in the mythic city of Rome, was crowned by a prestigious diploma - Diplôme supérieur de perfectionnement à l’unanimité - issued by the no less prestigious Académie nationale supérieure Santa Cecilia, and earned under the teachings of Sergio Perticaroli.

The encounter with the maestro, which will occur during the festival de Salzburg, will bring about the end of his apprenticeship, open up his artistic vision of the piano, and of life as a concert pianist.

To Axel, practicing the piano, life as a musician, and the role of the musician as an interpret are opportunities to open up spiritually, to discover not only the self, but humanity as a whole, because playing for the public implies having a humanitarian side, because interpreting, seeking the truth, and the artist within, implies self-discovery and working on the self.

Aside from his passion for the piano, he has also fed his love of literature and philosophy, via the works of such masters as Nikos Kazantzakis, Herman Hesse, Fédor Dostoïevski, and great thinker Jean-Yves Le loup, just to name a few…

His long apprenticeship in music, which ended in Rome, actually started at the Conservatoire d’Asnières, under the direction of Christian Manen, where he brillliantly mastered every level.

He was then introduced to Bruno Rigutto with whom he perfected his skills for a few years, before he would meet Jean-Claude Vanden Eynden, at the Festival de Novarra, whose class he joined at the Conservatoire Royal de Bruxelles, and earned the first prize in piano, music history, harmony, chamber music and analysis. He also started studying with Sergio Perticaroli at la Schola Cantorum in Paris, before returning to his Italian roots in Rome.

During his Italian journey, he has the opportunity to play and work in the Rodi Garganico Masters-class, to stay at the Medici Giulini villa, and to meet composer Davide Liani.

His desire for exchange and for experiencing different styles of interpretation cause him to further perfect his skills with pianists Jean Marc Luisada and Elena Rozanova, and to play with violonist Svetlin Roussev. He will also collaborate with l'atelier lyrique de Normandie, directed by Philippe Hui, accompanying French and German opera singers. During that priod of time, he finds his mentoring by Noël Lee most beneficial. Intrigued by musical and physical movement, he gets deeply involved in Tai-chi and sport.

In 2006, he is invited in the USA, where he performs a triomphant series of concerts in Alabama and Florida, a recital with pianist Robert Holm, and the recording of In concert and of Famous piano Duo.

Back in France, his presence is requested from one festival to the next: Coream, with Svetlin Roussev, Gorges du Tarn, Les Week-end du Piano at Maisons-Laffitte, Parc de Bel Ebat in Avon, Musique en Fête in Alsace, where he recreated on stage the Conservatoire National de la grande sonate de Marie Jaëll, Classique et Jazz in Val-Thorens, the Festival du Château de Martigny.

In 2008, he is asked to return to the US. This new tour takes him to Louisiana, Mississipi, and other Southern states. He plays in the New Orleans Trinity Concert series, gives a recital, performs a duet with Robert Holm, collaborates with several U.S. universities, namely South Alabama University and Birmingham University, and performs a live radio concert.

In 2011, to honor a composer with whom he has been fascinated since his debut as a pianist, he records Liszt Invocation, in which he takes us on a journey through Liszt’s various composition styles and transcripts.

In 2012, he is invited to the U.S. once more to perform various concerts, teach a masterclass, and speak at the Uiversity of Alabama on the piano techniques in French music.

In 2013, the album Alpha et Omega, combines the beginning works of Brahms with his latest ones.

In 2015, New tour in Usa and Canada, piano recital, master-class, duo, and a speak about Russian music.

In 2016, invited by the prestigious “Festival de Verbier” for a workshop about “Music and Brain”

In 2018, new invitation and new tour in Usa/Canada.